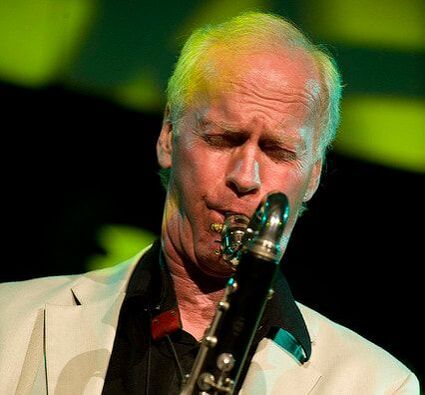 During a distinguished career spanning six decades, Paul McCandless has brought a soaring lyricism to his playing and composing that have been integral to the ensemble sound of two seminal world music bands, the Paul Winter Consort and the relentlessly innovative quartet, OREGON. A gifted multi-instrumentalist and composer, McCandless has specialized in a broad palette of both single and double reed instruments that reflect his grounding in both classical and jazz disciplines.

Born in the small town of Indiana, Pennsylvania to a musical family, McCandless inherited his artistic passion from his parents, who were both music teachers.  Like his grandfather, his father played the oboe and acquainted Paul with the world of musical instruments in his repair shop, where pieces of old horns became toys. By age nine, McCandless was playing the classical clarinet. He was introduced to jazz during junior high school and was learning saxophone at the time that he took up his primary instrument, the oboe.

As he continued his studies at Duquesne University and the Manhattan School of Music, McCandless embarked on his performing career playing with the Pittsburgh Symphony at Carnegie Hall and the United Nations when he was only 19.

At the recommendation of his oboe teacher, Robert Bloom (Toscanini’s principal oboist), he joined the Paul Winter Consort. While recording the album, "Icarus", McCandless worked with producer George Martin, who also produced albums for "The Beatles". Martin played the oboe himself as a young man and later wrote in his book ("All You Need is Ears") that Icarus was his favorite recording project of his entire career. McCandless said of this, "I still glow with pride at that quote, because he was a real visionary and helped bring a lot of creative music into the world." McCandless played with the Paul Winter Consort until 1973, recording five albums and appearing at the Fillmore East and the Fillmore West, the Tanglewood and Schaeffer Festivals, and numerous colleges throughout the U.S.

While he was a member of the Consort, McCandless formed an alliance with guitarist/pianist Ralph Towner, bassist Glen Moore, and percussionist Collin Walcott to form the group Oregon.

While Oregon recorded with Vanguard and Elektra/Asylum, they were able to use ample studio time to explore and expand their repertoire. At the beginning of the digital era, they worked with engineer David Greene to create unique sounds on "Out of the Woods", "Roots in the Sky", and "In Performance".

In 1999, Paul recorded three of his orchestral scores written for Oregon and the Moscow Tchaikovsky Orchestra, on a CD called "Oregon in Moscow".

In his odyssey through the woodwind family, McCandless gradually expanded his array of instruments, adding the bass clarinet, soprano and sopranino saxophones, penny whistles, various ethnic flutes, and the electronic wind controller to his primary instruments, the oboe and English horn.
​
He has widely extended his reach outside of Oregon as a collaborator and solo artist and is credited with more than 150 albums and performances with such musicians as Jaco Pastorius (Invitation on Warner Brothers), Carla Bley (Night-Glo on Watt-Works), Art Lande/Dave Samuels (Skylight on ECM), Eberhard Weber (Later That Evening on ECM), as well as with Wynton Marsalis, Pat Metheny, Mark Isham, Steve Reich, Al Jarreau, Bruce Hornsby, Victor Wooten, Fred Simon, Michael Manring, Darol Anger, Mike Marshall, and the String Cheese Incident.

He inaugurated his recording career as a leader with "All the Mornings Bring" on Elektra/Asylum, which was followed by "Navigator" on Landslide. The desire to work with larger compositional forms led to his 1988 release "Heresay" on Windham Hill, featuring pianist Art Lande and Pat Metheny Group bassist Steve Rodby, followed by "Premonition" in 1992 with renowned players: Metheny Group pianist Lyle Mays, Steve Rodby as producer and player, Yellowjackets drummer William Kennedy, and Oregon drummer Mark Walker. He toured with his own quintet featuring Mays and Rodby in the U.S. and Canada and headlined at the Montreal Jazz Festival.

He recorded three albums and toured with Béla Fleck, with whom he won a Grammy in 1996 for Best Pop Instrumental.

While an artist on Windham Hill, McCandless contributed to numerous anthologies including Bach Variations, The Impressionists, The Romantics, and Solstices II-VI, two of which were gold records. He also composed and recorded Squanto and the First Thanksgiving for Rabbit Ears Productions which was aired on Mel Gibson’s children’s program on National Public Radio. In 1997, he wrote, scored, and performed four symphonic compositions with the Camerata Orchestra in Mexico City.